The Story in India

Long long ago before 1989, there was a team of Outdoor enthusiasts lead by Vasant Limaye who organized Himalayan treks for people from Europe. Vasant used to spend time in UK to get people to Himalayas. While doing so he happened to work as resource person on Outbound Learning programmes conducted there. The concept of outbound learning was not known in India then.

Back here in India this bunch of outdoor enthusiasts had started conducting educational children camps, where Mrunal Paranjape joined with her research on ‘Impact of Outdoors on Learning.’ This was the time when the seeds of Outdoor based learning programmes got sowed in Indian soil. One of the parents of a child from the children programme found this concept really interesting and shared his desire to do something similar for his team from office. This took a serious turn and the training department from his organization Bharat Petroleum Corporation Limited (BPCL) got involved with High Places to understand and design such an outdoor programme for managers.

Around the same time few consultants who formed a group called ‘BSC Behavioral Science Centre (India)’ - had read and studied of such a medium and its impact, found this interesting and thought of doing something similar. That is when they involved High Places for their pilot project and launched an open module of Outdoor based learning programme for managers.

Both the programmes got planned around the same time and though the open programme launched by BSC was scheduled first, for some reasons it got postponed. And that is how on 27st September 1989, High Places conducted India’s first Outdoor Management Development programme for senior managers from BPCL at the base of Rajmaachi Fort near Lonavala, Pune. Subsequently the programme for BSC followed.

The first two programmes happened and nobody knew then that this was going to be the beginning of a new learning medium in India. The outdoor persons from High Places including Vasant and Mrunal who conducted these programmes created the term ‘Outdoor Experts’, that has become a title used by the entire Outdoor Industry across India.

One the first programme for BPCL, Mr. G.K. Date an OD Consultant with BPCL found this concept unique and chose to be a part of the programme. It was he who introduced the concept of facilitating the activity experience to create a holistic learning experience. This entire experience was truly novel and exciting for everyone the participants, the conductors and the consultants. Both Vasant and Mrunal got introduced to Human Process Work by Mr. Date and felt that the combination of outdoors and process work could create great value and learning experience. In 1989, High Places conducted 4 programmes and the belief grew stronger. This became a turning point and High Places decided to commit itself to create and conduct Outdoor based learning programmes for managers. That is also the reason 27th September; the date of the first OMDP (Outdoor Management Development Programme) in India is celebrated as High Places birthday. 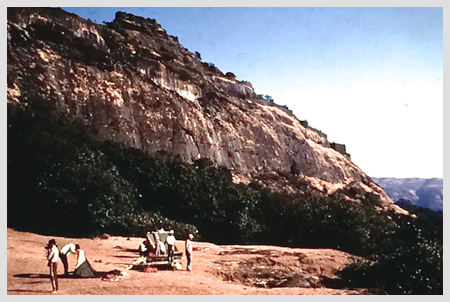 The Journey – in High Places

The decision to commit to OMDP was made in 1989, and there the challenge began. The concept was still new, both Vasant and Mrunal spent days and months meeting different organizations to share how this learning medium could add value to managers and organizations. What helped was the experience of first 4 programmes and slowly few organisations dared to try this medium. In fact the trend continued, as High Places conducted more programmes, people and organizations were more ready to believe in this concept and medium and more programmes started happening.

In last over 29 years more than 1,00,000 participants from over 650 organisation across India have benefited from programmes conducted by High Places. Currently High Places conduct over 700 programmes in a year.

Starting with Rajmaachi, High Places has conducted programmes at more than 130 locations across India and also crossed the boundaries to conduct programmes in Sri Lanka, Nepal, Thailand and Oman.